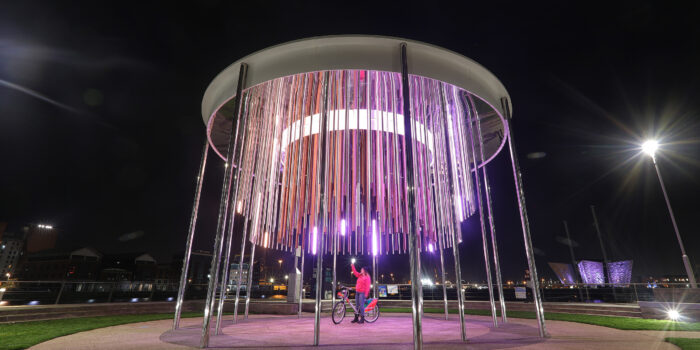 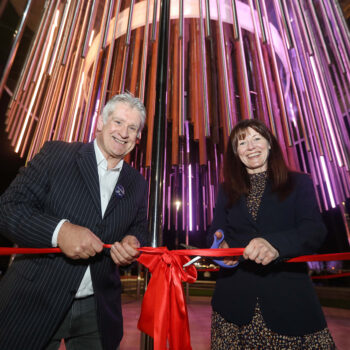 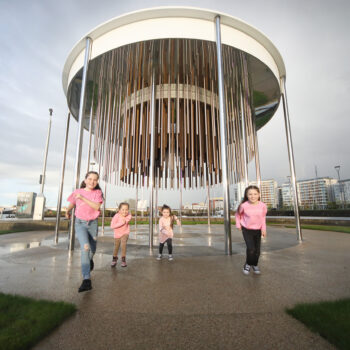 SoundYard is a playful art installation inspired by the sounds of Belfast’s shipyards. It is located on Queen’s Quay close to the Odyssey and Abercorn Marina. 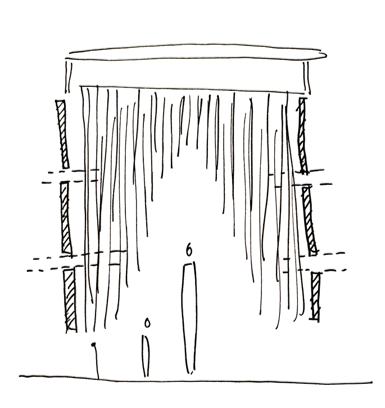 SoundYard was the winning entry of the City Play Design Competition held by the Royal Society of Ulster Architects (RSUA), JP Corry and Maritime Belfast. The aim was to challenge young architects to generate innovative ideas for play on Belfast’s Maritime Mile. This historic area of waterfront stretches one navigational mile and connects attractions, public realm, sculptures & viewing points on both sides of the river.

The Design Team took their inspiration from our industrial past and the immense shipyards that once employed thousands of people. Their striking design and innovative play area celebrate Belfast’s maritime heritage, inspired by the constant noise of striking, hammering and riveting of metal that was once heard in the shipyards.

The project has been funded by Tourism NI, Maritime Belfast Trust, JP Corry, Belfast Harbour, and Belfast City Council, with collaborative partnerships with the Royal Society of Ulster Architects, Todd Architects and the Odyssey Trust.

The completed installation is 6 metres tall and 9.6 metres wide. The sculpture consists of over 500 suspended metal rods hung in circular rings from a steel support structure. The outer veil consists of  reflective metal rods, designed as an acoustic buffer and visual mirage, and the inner veil consists of  suspended sound tubes. Movement sensors enable users to activate a motorised system of steel hammers that in turn strike the hollow tubes to generate the nostalgic sounds of striking metal once prevalent in the shipyards.

The young architects, Hannah Wilson, Matthew Kernan and Eunan Deeney, also considered the circular economy for the built environment, and how elements have been designed with re-use, repurposing and recycling in mind.

SoundYard isn’t just a daytime experience, after dark it turns into a stunning light installation, with the metal rods and veil illuminated. If you’re enjoying an evening stroll along the Maritime Mile, SoundYard is one of a number of key attractions that light up at night, from the Great Light to Titanic Belfast. 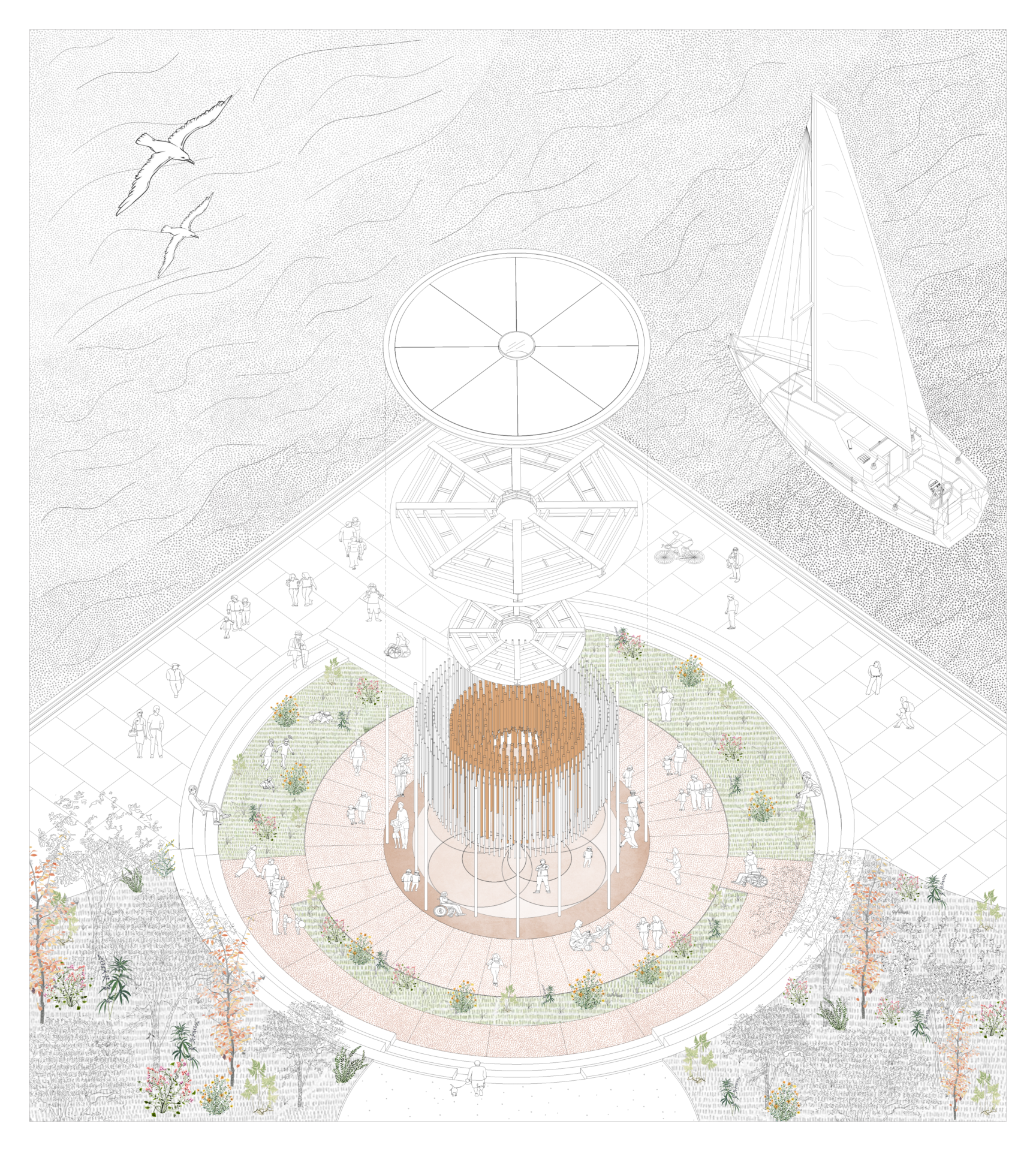 SoundYard is located on Queen’s Quay, which was built in the 1840s as Belfast Harbour began to develop and expand. Belfast was built where three rivers, the Lagan, Farset and Blackstaff, met and joined the sea. The area was originally marshy and difficult for ships to navigate. Gradually over hundreds of years the rivers were straightened, turned into culverts and quays and the riverbeds were dredged.

Queen’s Island and the Abercorn Basin were built in the 1860s, establishing the County Down side of the Harbour as the perfect location for shipbuilding. An early brass foundry was once located at Queen’s Quay, but it was better known as the site of Kelly’s coal yard. Kelly’s coal boats were a familiar sight transporting coal in and out of Belfast providing important fuel for Belfast’s industries and homes.

Queen’s Quay was also a busy transportation hub. The railway lines from County Down terminated here and the nearby ferry stop transported shipyard workers across the harbour to work. The land was redeveloped to build the Odyssey Arena & Pavilion in 2000 to celebrate the millennium.

Sounds of the Shipyard

Queen’s Island is a much quieter place now, and the noises made at Harland & Wolff no longer echo across the city, but you can still hear the siren when the yellow gantry cranes (Samson & Goliath) are repositioned across the dry dock.

We’ve gathered together some of our favourite quotes describing the sounds of the shipyards:

“When the shipyard was closed on Sundays or holiday periods, the silence was ‘deafening’! We were so used to hearing the constant sounds of hammering, shipyard horns blaring, the workers steel-capped boots on cobbles and shouts of the workers trying to make themselves heard over the din.” Charlotte Crothers née Gilpin, whose father John Gilpin worked on RMS Titanic’s construction as a joiner.

“The noise was deafening, incessant. I once went to a meeting in the Victoria Works boiler shop and couldn’t hear any of the conversation over the noise. Then I realised the other 3 men at the meeting were all lip reading.” Rodney McCullough, former H&W employee.

“The noise made by the riveters at work upon the ship is so great that we can hardly hear each other speak. They strike alternately, first one and then the other, and they swing their hammers so fast that the noise of the blows is continuous.” A Day in the Shipyard: Building the Olympic, Oliver Cooke 1911/12.