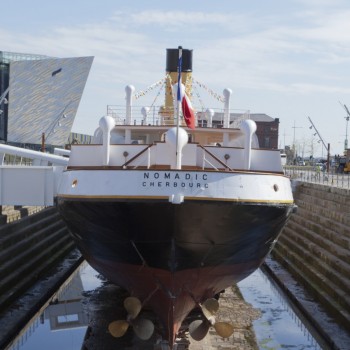 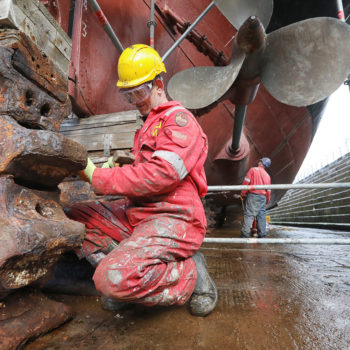 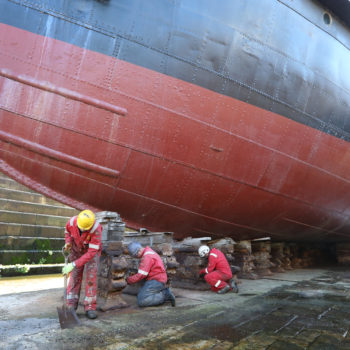 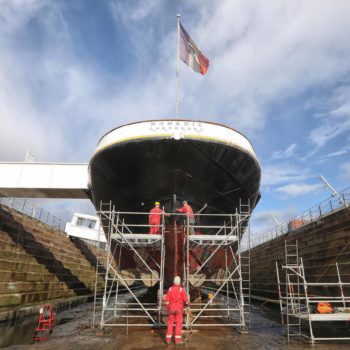 The Maritime Belfast Trust acquired the SS Nomadic, the biggest Titanic artefact, from the Nomadic Charitable Trust in April 2015

As part of Maritime’s remit to protect and promote the maritime and industrial heritage of Belfast, in April 2015 we took on ownership of the SS Nomadic.

The SS Nomadic is the last remaining White Star Line ship anywhere in the world, an authentic piece of Belfast’s maritime heritage and the biggest Titanic artefact.

Designed and built by Harland and Wolff in 1910-11, the SS Nomadic is the last remaining White Star Line ship anywhere in the world. A quarter of the size of the Olympic Class Liners Olympic and Titanic, the Nomadic has many of the same luxurious finishes and was built to be a tender ship when the passenger liners were moored off ports that weren’t deep enough to accommodate them.

SS Nomadic, yard number 422, was launched on April 25th 1911, and was capable of carrying 1000 passengers segregated into First, Second and Third Class accommodation. Nomadic was sent to Cherbourg in June 1911 to commence tendering duties, and in 1912 transported 274 passengers, their luggage and ships’ stores out to RMS Titanic when it docked there in April. The SS Nomadic was built on slipway 1 nearby (Olympic & Titanic were built on slipways 2 & 3) and is said to have been fitted out in the Hamilton Dock, so it is a natural home for it today.

The SS Nomadic began its career as a tender ship, but also saw active service in both World Wars as a troop carrier and minesweeper. Built in just 159 days on slipway no 1, the Nomadic measures 233 feet and 6 inches, and is 37 feet and 2 inches wide. With 1 funnel and 2 engines, Nomadic had a gross tonnage of 1273 and a maximum speed of 12 knots., she was in service for 57 years.

Nomadic also carried thousands of passengers out to the world’s great liners in Cherbourg, including the Queen Mary and Queen Elizabeth, before spending decades in Paris as a floating restaurant and party venue. In the 1930s when Cunard and White Star Line merged, Nomadic was sold to the Cherbourg Tow & Rescue Society and renamed Ingenieur Minard. She resumed service as a tender after the second world war before becoming a floating restaurant.

In 2005 Nomadic was languishing in Le Havre when local enthusiasts became aware of its plight, and began a campaign to ‘Save the Nomadic’ from scrappage. The Department for Social Development stepped in and bought Nomadic in 2006 for £171,320 or 250,001 euro. The auction was unusual in that the successful bid was confirmed with the extinguishing of three candles.

The Nomadic returned to Belfast later that year and the Nomadic Charitable Trust was set up to oversee its restoration and conservation. Funding for the project came from Belfast City Council, Belfast Harbour Commissioners, the Department of Social Development, the National Lottery Heritage Fund, Ulster Garden Villages, the Special European Union Programmes Body (Peace III) and Tourism Northern Ireland.

Almost a hundred years after they originally built Nomadic, Harland & Wolff were appointed in 2011 to refurbish the ship, reinstating the bridge deck, flying bridge desk and the funnel. The interiors of the ship were returned to their original condition, with many of the original ornate panelling reinstated. The Hamilton Dock was also restored alongside the ship it now housed.

The restored ship and dock opened to the public in 2013.  Once opened, the Nomadic Charitable Trust recognised that they shared the same objectives as Maritime Belfast and agreed that they would transfer their assets over and subsequently wind up to create greater operational synergies and sustainability across Titanic Quarter. Maritime Belfast acquired the SS Nomadic in April 2015 and incorporated it into the Titanic Belfast visitor experience.