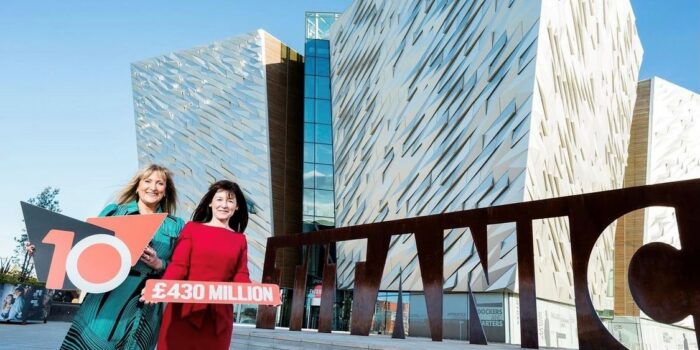 Titanic Belfast is a visitor attraction and a monument to Belfast's maritime heritage on the site of the former Harland & Wolff shipyard.

In 2004 Tourism NI and Belfast City Council recognised the need for a ‘must see visitor attraction’ in Belfast, and the unique position the city had as the birthplace of RMS Titanic. Over the following years a feasibility study and consultation were carried out and the Titanic Signature Project began to emerge. In 2006 the first planning application for the site in Titanic Quarter was submitted, and with the Northern Ireland  Assembly taking responsibility for devolved matters in 2007, one of the first key decisions made was the investment in the Titanic Signature Project.

The Maritime Belfast Trust was established in 2008 (then known as Titanic Foundation Limited) and took over the further development of the Titanic Signature Project. Funding of the project would be a joint private & public investment via Tourism NI, Belfast City Council, Belfast Harbour Commissioners, and Titanic Quarter Limited.

The architects Civic Arts were appointed, with the late Eric Kuhne the key conceptual architect, coming up with the iconic shape – to reflect the shape of the prows of the ships that were once built in the shipyard, the White Star Line logo, ice crystals, and the points on a compass. Todd Architects provided the onsite project management and internal fitout, and the building was constructed by Harcourt Developments.

Work began in 2009, building an 8 storey visitor attraction on the edge of the slipways where Titanic was constructed more than a hundred years previously. The main exhibition consists of nine interpretative galleries drawing together special effects, a shipyard ride, full-scale reconstructions and innovative interactive features. The galleries include an Ocean Exploration Centre which provides an insight into local and international marine life with direct links to Robert Ballard and the discovery of Titanic’s wreck.

The building was completed in March 2012 and in addition to the interpretative galleries, features a conference and banqueting suite on the top two floors, including a replica of the liner’s Grand Staircase, as well as a café, restaurant and gift shop in the ground floor public atrium. The Andrews Gallery is available for temporary exhibitions, events, performances and meetings, and the Education Suite provides an education facility for schools and community groups.

Titanic Belfast was officially opened by the First and Deputy First Ministers Peter Robinson and Martin McGuinness on the 31st March 2012, marking the centenary of Titanic’s maiden voyage.

Since opening Titanic Belfast has welcomed 6.5 million visitors from 145 countries, and won numerous awards. In its first ten years, it has generated more than £430 million in additional tourism spend for the Northern Ireland economy.

The visitor attraction has exceeded all expectations and in 2016 was named the World’s Leading Tourist Attraction in the World Travel Awards.

To plan your visit to Titanic Belfast, please visit their website www.titanicbelfast.com