Local landmarks the Belfast Buoys have found a new home on the Maritime Mile. They were given to Belfast City Council by the Commissioners of Irish Lights in 1983 and originally located in the Cathedral Gardens, which became affectionately known as ‘Buoy Park’ because of the iconic buoys. Regeneration of the area around the Ulster University prompted plans for the buoys to find a new home, and Maritime Belfast worked with Titanic Quarter Limited and Belfast City Council to bring the buoys to the Abercorn Basin.

The Buoys were once part of a water feature in Cathedral Gardens, and for Belfast Culture Night the Buoys were decorated by local artists, yarnbombed (covered with knitted & crocheted artwork) and painted.

In January 2019, the buoys were taken to the Irish Lights Headquarters and Big Buoy Store in DunLaoghaire for restoration. They returned to Belfast took up their new residence in Abercorn Basin just as the Tall Ships arrived for the Belfast Titanic Maritime Festival. 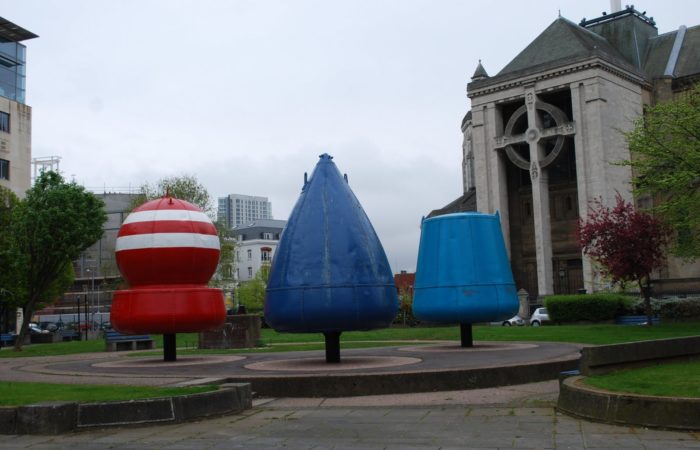 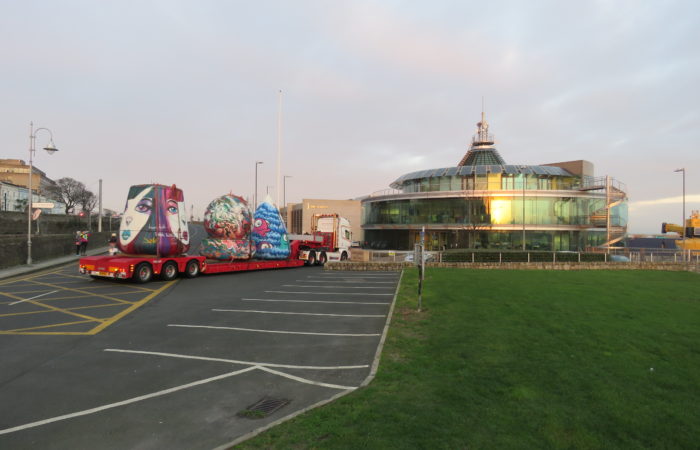 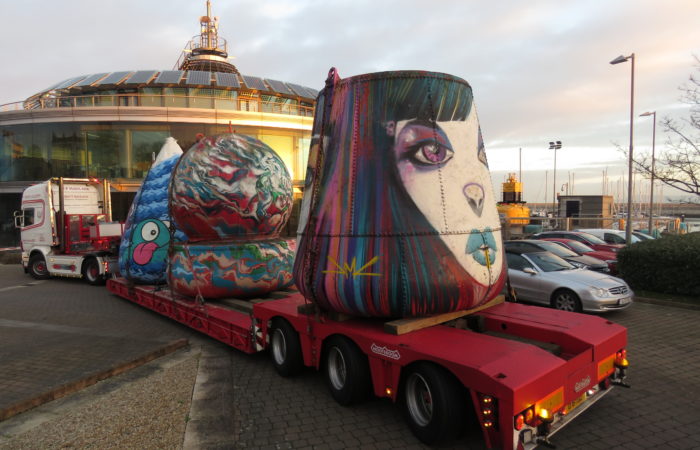 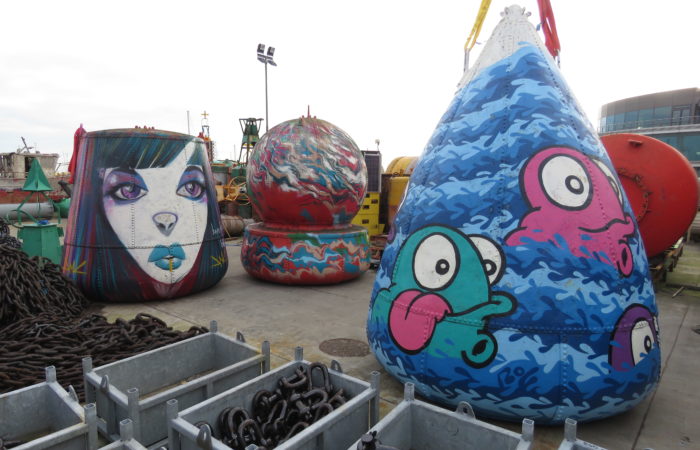 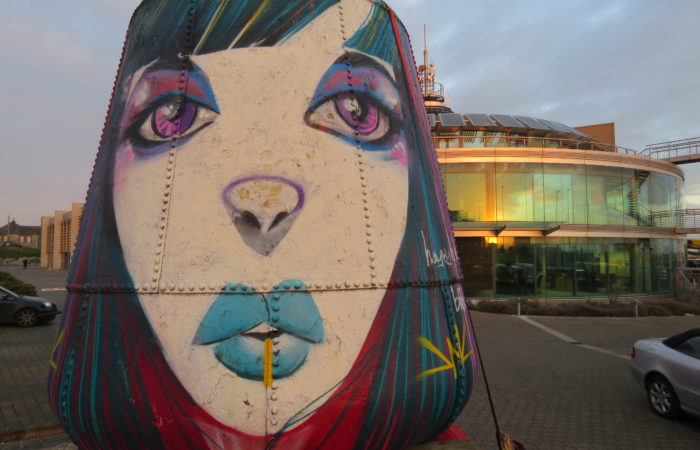 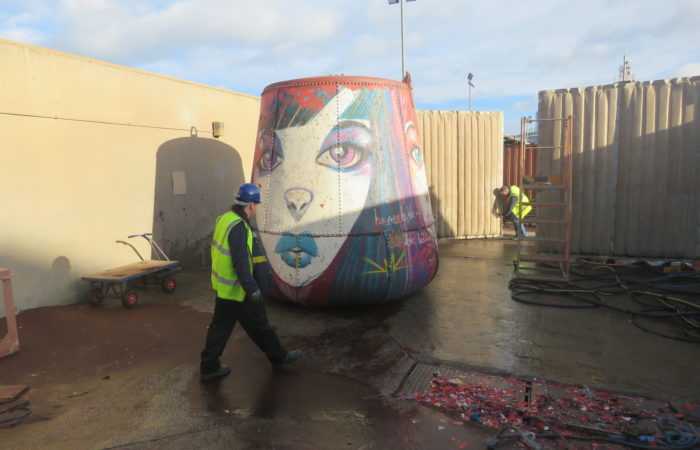 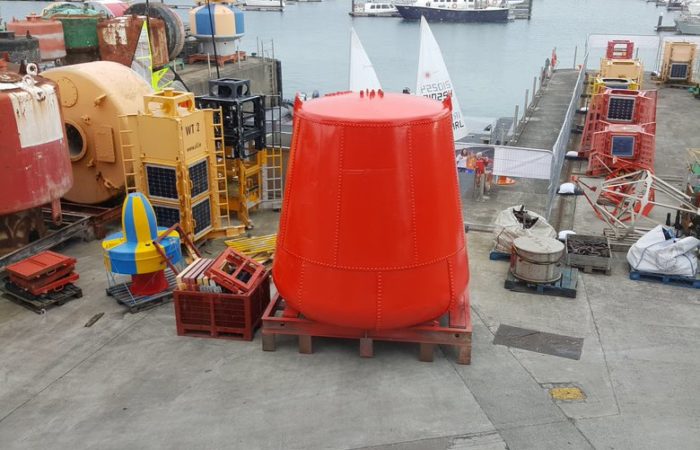 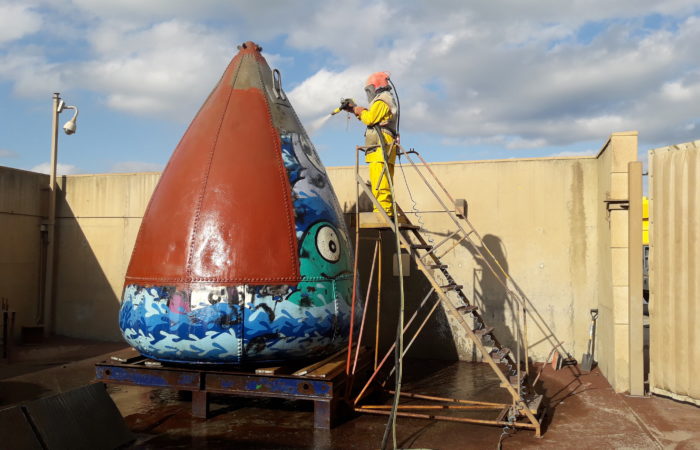 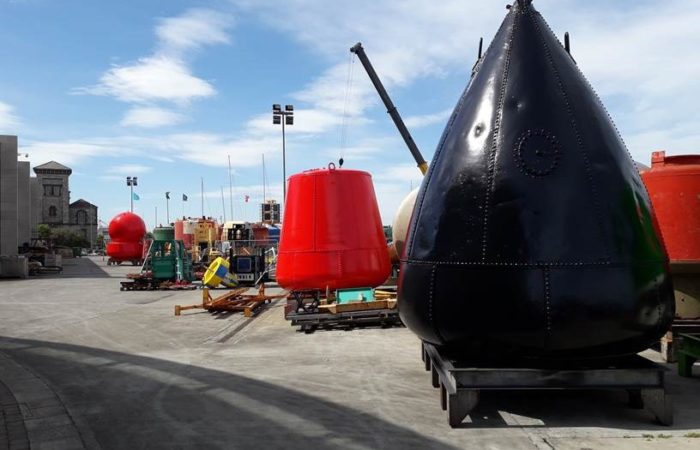 The three buoys are estimated to be around eighty years old, and would have been used by mariners to find a safe channel to and from port. Similar buoys would have been used in Belfast Harbour, marking the edges of the narrow Victoria Channel. The red can shaped buoy marked the left side of the channel, the black conical buoy the right side, and the red spherical striped buoy marked the junction in the channel, or middle ground.

Each buoy weighs around 3 tonnes and are made of thick steel plates riveted together. They are hollow structures, filled with air to allow them to float, and they would have been secured in place by mooring chains, attached to a cast iron sinker sitting on the sea bed.

Buoys were first used around the coast of Ireland in the 1800s as shipping and trade began to boom, but the first recorded use of them was in Spain in 1295. Early buoys would have been made of wood and iron, coated in tar to keep them watertight. In 1566 Queen Elizabeth I passed an act that gave Trinity House, the English lighthouse authority, the right to establish buoys and beacons around the coast. The Commissioners of Irish Lights was established in 1786, and formalised in 1867 becoming responsible for lighthouses and aids to navigation around the Irish coast. The Northern Lighthouse Board is responsible for Scotland and the Isle of Man.

Modern buoys are now much more technologically advanced, and are solar powered, with larger buoys also fitted with electronic aids such as GPS, GSM (telecoms), AIS, AtoN and Radar Transponder Beacons. There are even ‘smart buoys’ that are equipped with meteorological and oceanographic sensors. Irish Lights maintain appropriately 150 buoys around the Irish Coast, but there are thousands of other buoys and local Aids to Navigation maintained by local authorities, ports, harbours, etc. 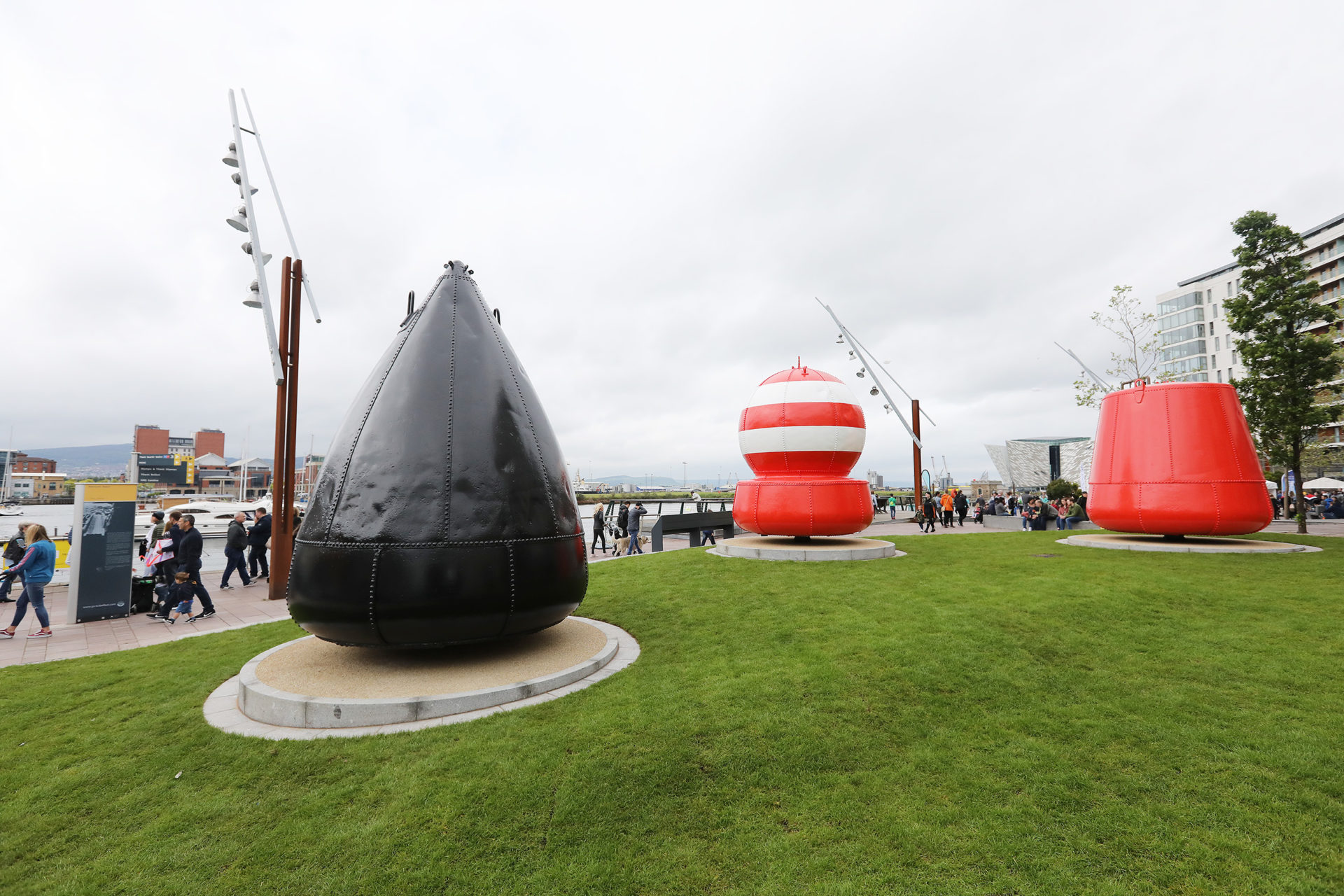 There has been some debate about what colour the buoys were originally, and local people may remember that at one point in Cathedral Gardens they were repainted the ‘wrong’ colours. Before they made their new home on the Maritime Mile, our Maritime Belfast researcher worked with Irish Lights and the UK Hydrographic Office to determine the correct colours for the Belfast Buoys.

The research involved going back to historical navigational and admiralty charts and pilot books to check what colour and pattern of stripes – horizontal or vertical, the spherical buoy in particular would have been painted.

The confusion around the colours arose as the buoys were believed to be painted according to the colours specified in the League of Nations Uniform System of Buoyage in 1936. But due to the outbreak of World War II the Treaty was never signed, and it wasn’t until 1977 that a worldwide system of buoys was agreed. The shapes and colours of the buoys changed, with the black buoys largely becoming green with some exceptions.

The navigational charts and pilot books referred to the spherical buoy having stripes, but were they horizontal or vertical? Confirmation came via an Irish Pilot Book from 1911 that described a spherical buoy in the Victoria Channel (a Middle Ground buoy just off East Twin Island), as ‘painted with red and white horizontal stripes.’ A navigational chart from around the same era illustrated the spehrical buoy with red and white stripes or hoops.

The Commissioners of Irish Lights took their guidance from the research and once the restoration work was complete, painted the buoys the colours you see today: black, red, and red with white hoops.