Celebration at the Four-Front of Eastside Awards 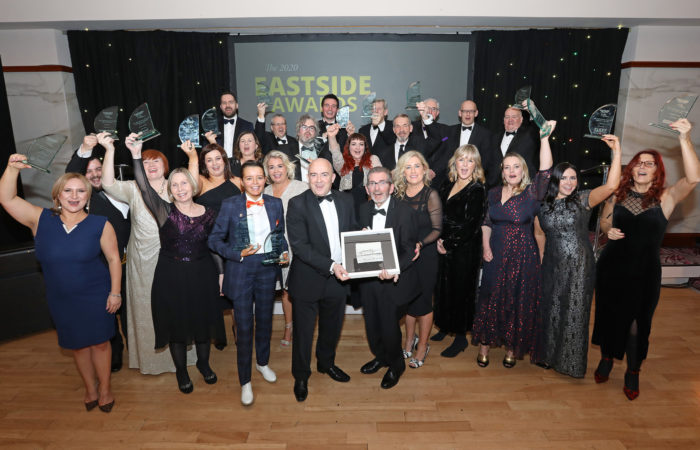 The sense of celebration was almost palpable as the largest gathering of guests to date attended the annual Eastside Awards in association with George Best Belfast City Airport, hosted by television presenter Tara Mills, in Hastings Stormont Hotel.

Colm Davis spent his career working to improve the lives of children with special needs. As Principal of Tor Bank School in Dundonald he fought long and hard to secure funding for a much-needed new school and now the children enjoy fantastic facilities after years of being taught in mobile classrooms. In a cruel twist of fate he was diagnosed with Motor Neurone Disease the year after the new school opened its doors and had to retire early on medical grounds. But he hasn’t stopped campaigning for special needs children and has begun lobbying for MND research during his retirement.

There was double delight for Zara Janahi as she took the titles of Volunteer and Young Person of the Year. Judges commented that she is a young person who is going places and they were really cheered up by her application.

Eastside Award for Carer of the Year sponsored by Wolseley: Rowena Frazer

Eastside Award for Employer of the Year sponsored by Fleet Financial: Pacem

Eastside Award for Taste Experience sponsored by We’re Sure: Ronnie’s

Stephen Patton, Human Resources and CR Manager at George Best Belfast City Airport, said: “For four years running, George Best Belfast City Airport has been the proud principal sponsor of the Eastside Awards and is continually honoured to be involved with an initiative that celebrates all that is good and great about east Belfast. The calibre of finalists keeps getting better each and every year and as a business based in the heart of east Belfast, we are lucky to be surrounded by such passionate and dedicated people. I would like to congratulate all the finalists for their commitment to continually enhancing our community.”

Jonathan McAlpin, Chief Executive of East Belfast Enterprise and Chair of Eastside Awards Committee, said: “The Eastside Awards is truly at the forefront of celebrating all that is good about East Belfast and, in this our fourth year, I’m honoured and humbled in congratulating those who have achieved magnificent success within our community. From the record numbers in attendance to recognising the outstanding Colm Davis as our Outstanding Contributor and ending with a performance by DJing legend Terri Hooley, the fourth annual Eastside Awards was a truly memorable occasion. Our committee certainly has its work cut out for 2021 as we come together to deliver the fifth annual awards as the fourth Eastside Awards has exceeded my expectations in every way!”

Eastside Awards finalists were treated to a VIP reception courtesy of sponsor The Waterside Belfast and entertainment sponsored by The Open University included a performance by Queen’s Island Male Voice Choir and a set by DJing legend Terri Hooley.