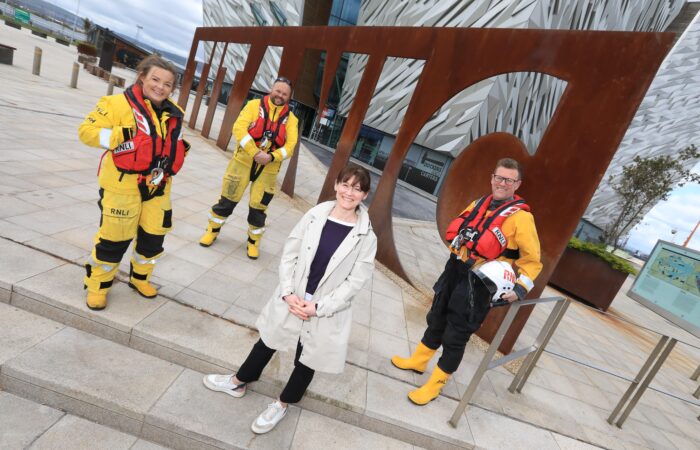 The RNLI has launched its Mayday Mile fundraiser as the charity’s rescue figures for 2020, show lifeboats at Northern Ireland’s 10 stations launched 234 times with its volunteer crews bringing 253 people to safety. Eighty-nine of those launches were carried out in the hours of darkness.

RNLI lifeguards meanwhile, responded to 225 incidents during the 2020 season coming to the aid of 285 people, six of whom were lives saved.

During the summer months of June, July and August alone, and amid dealing with Covid-19 restrictions and additional safety protocols, RNLI crews at Kilkeel, Newcastle, Portaferry, Donaghadee, Bangor, Larne, Red Bay, Portrush, Carrybridge and Enniskillen, launched their lifeboats 136 times, coming to the aid of 189 people. Three of those were lives saved meaning that without the actions of the lifeboat crews, they would not have survived. Crews launched their lifeboats in response to a range of activities and people in difficulty throughout the year including kayakers, canoeists, and jet-skiers; motorboats, fishing and sailing vessels and to swimmers, walkers, and runners.

The charity is now putting out its own Mayday call for help as it prepares for a busy summer. With high numbers of visitors expected as more people choose to holiday closer to home, more funds are needed to ensure the lifesaving service is able to keep everyone safe. The RNLI is asking people to do their own Mayday Mile to help raise funds.

In Belfast, the RNLI has partnered with another charity responsible for preserving the city’s maritime heritage, Maritime Belfast Trust, to launch the Mayday Maritime Mile. Throughout the month of May, locals and visitors alike are being invited to walk, cycle, run or play in the footsteps of giants as they explore Belfast’s historic waterfront and make a voluntary donation to the RNLI. Visitors can take part in a maritime themed treasure trail where clues will be gathered along the way. A mystery word will be untangled as people take in the sights, sounds and smells of the waterfront, discovering some of the city’s iconic heritage giants and public art along the way including the Big Fish, Clarendon Dock, SS Nomadic, Titanic Belfast, the Great Light and the Thompson Dock.

Nicola Kelly, RNLI Community Manager said: ‘Our lifeboat crews have remained operational throughout the pandemic and have had to operate in a different way while wearing additional PPE including surgical masks. They have done this while launching their lifeboats to help those in trouble on the water.

‘As another summer approaches, we know that our lifesavers face more challenges in keeping everyone safe, which is why we are now the ones sending out our own Mayday call and asking for help. Our annual Mayday fundraising campaign is our call for your support to help keep you and your family safe this summer.’

Kerrie Sweeney, Chief Executive of Maritime Belfast Trust, said: ‘We are delighted to be working in partnership with the RNLI. The Mayday Maritime Mile campaign is a wonderful experience that will fuel the imagination and get you exploring the great outdoors featuring the most interesting parts of Belfast’s iconic waterfront. As we come out of the lockdown, it is important that we work together, especially charities and the voluntary sector. We hope the Mayday campaign raises much needed funds for the RNLI while inspiring local people and visitors to embrace Belfast’s Maritime Mile and increase their knowledge of the city’s important maritime heritage in a family friendly and fun way.’

Launching this Saturday 1 May and running for the whole month, the RNLI’s Mayday campaign asks people to sign up to support lifesavers around Ireland and the UK. This year, the charity will be calling on supporters to join the Mayday Mile, and cover at least one mile in any way they like in order to raise vital funds.

Iain Kaleda, Donaghadee RNLI volunteer crew member pictured, added: ‘Our lifesavers in Donaghadee and across Northern Ireland will drop everything to run to the lifeboat station when the call comes, so we’re asking our supporters to put themselves in the crew’s boots and join the Mayday Mile. Every penny raised during Mayday will go towards ensuring we are ready to save even more lives this year.’

To sign up for the Mayday Mile, or to make a donation in support of the RNLI’s lifesavers, visit RNLI.org/supportMayday. To find out more about the Mayday Maritime Mile Treasure Trail, visit maritime-mile.com/treasure.