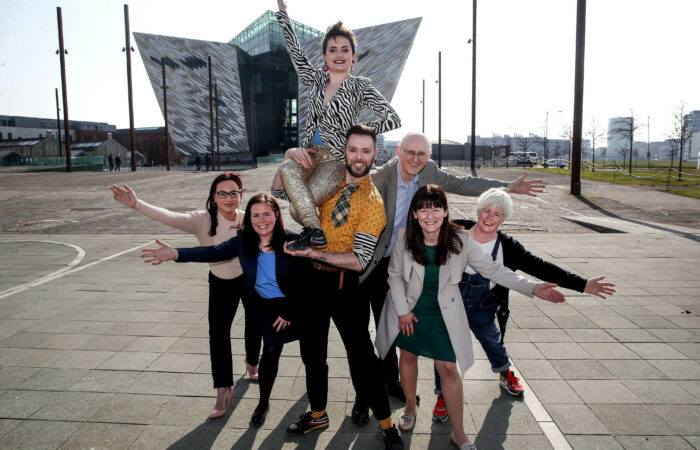 Established in 1962, the city’s longest-running international arts festival, reimagined and reborn as Belfast International Arts Festival (BIAF) in 2015, has announced a new extended season of contemporary arts and cultural events as it marks its milestone 60th year.

For six decades the festival has ensured that the residents of Belfast alongside its international visitors have access to the best of world class artists and events from home and abroad.

And to kick-off its 2022 celebrations, the festival has revealed a special gift to its host city, as Artistic Director and Chief Executive Richard Wakely explains.

“This is a momentous year for the festival. We look back with pride on what we have achieved, but more importantly we are seizing the moment to redouble our efforts and push the boundaries of arts and ideas; programming and commissioning events that reflect our future ambitions and embody our guiding values around global connectivity, community, accessibility, cultural diversity and collaboration.

“In a break from tradition, we are planning a captivating season of events in the months leading up to our core festival programme in October. We will launch with a spectacular, large-scale night-time outdoor performance in Titanic Quarter by French company Transe Express who audiences may recall brought us the stunning Mù in 2016. This is our gift to the city of Belfast on our 60th birthday.”

On 23–24 April, the public are invited to dance beneath a gigantic chandelier as Cristal Palace by Transe Express transforms Titanic Paddocks, adjacent to Titanic Slipways on the Maritime Mile, into an open-air ballroom complete with an airborne orchestra, aerial acrobats and sharp-witted characters. Cristal Palace is presented by BIAF in association with Belfast City Council, Circusful, Maritime Belfast Trust and Titanic Belfast.

Roisín McDonough, Chief Executive, Arts Council of Northern Ireland said, “The Cristal Palace event promises to be an uplifting and joyous outdoor experience for everyone. It is perfectly timed to bring people a new sense of wellbeing after so long in lockdown, and we are delighted to see arts organisations providing opportunities like this for fun, creative, public participation. I encourage as many people as possible to attend this fabulous free event. Our thanks go to Belfast International Arts Festival who are celebrating their 60th anniversary this year, and to the Department for Communities, for their help in funding this terrific initiative.”

Cristal Palace is a major free civic event that links the past, present and future of BIAF, Titanic Quarter and more widely, the city itself.

Richard Wakely explains “Harking back to the “People’s Park” on Queen’s Island, the performances of Cristal Palace offers residents and tourists an opportunity to come together to enjoy a spectacular free outdoor event on the same site as Belfast’s very own Crystal Palace of 1851.”

Lord Mayor of Belfast, Councillor Kate Nicholl said: “What an exciting, spectacular and fitting way to celebrate a trio of big anniversaries for the city – Belfast Harbour’s 175th, Belfast International Arts Festival’s 60th and Titanic Belfast’s 10th this April.  I can’t wait to see Belfast residents and visitors from near and far dancing together at the ‘Cristal Palace’ free open-air ballroom event on Titanic Paddocks. Titanic Quarter is becoming so important once again – as our innovation district, a place to live, work, play and be inspired. We’re proud to be a longstanding supporter of Belfast International Arts Festival, and we very much value the contribution it makes to the city. It’s a cultural treasure – connecting us with diverse artistic perspectives and experiences from around the world. I wish everyone at BIAF a very happy anniversary and the very best of luck for the Spring and Autumn programme. Here’s to the next 60 years and beyond!”

Cristal Palace is programmed to align with a number of major anniversaries, including 60 years of the festival, 10 years of Titanic Belfast, 150 years of St Joseph’s Church Sailortown and 175 years of Belfast Harbour. The event is to be delivered by a partnership of like-minded organisations working together in the social and economic reopening of the city as we emerge out of the pandemic.

Kerrie Sweeney, CEO Maritime Belfast Trust, said, ‘’We are delighted to support Belfast International Arts Festival to stage Cristal Palace on this significant historic location on the Maritime Mile. In this year of special anniversaries and celebrations, local communities and visitors can enjoy this outdoor extravaganza and reconnect with the city’s iconic historic waterfront.’’

Judith Owens, CEO at Titanic Belfast, commented, “We are delighted to have such a visionary show coming to Titanic Quarter as part of our 10th birthday celebrations. In the same way that RMS Titanic and Titanic Belfast have pushed boundaries, this performance will be something never seen before in Belfast and we can’t wait to celebrate with our guests under the grandeur of the magnificent chandelier reminiscent of the luxury and opulence that was found on board RMS Titanic herself.”

Cristal Palace also brings opportunities for local involvement in the production. Circusful, Belfast’s own circus arts centre, will be involved in recruiting members of the community cast.

Jenna Hall, CEO of Circusful said “Bringing Cristal Palace to Belfast offers a wonderful opportunity for members of the community to play an important role in the delivery of a large scale, circus spectacular. We are delighted to be working in partnership with Belfast International Arts Festival and others to make this a reality. The event is definitely one not to be missed!”

The two-day spectacle will be followed by a series of festival events in May, including Between Tiny Cities (6–7 May) at The MAC, an exhilarating hip hop b*boy battle between two dancers, one from Cambodia and one from Australia, and a selection of family-friendly events set to take place in July and August.

BIAF will make further announcements about its expanded 60th season in the weeks ahead, including the core festival provisional dates of 19 October – 6 November.