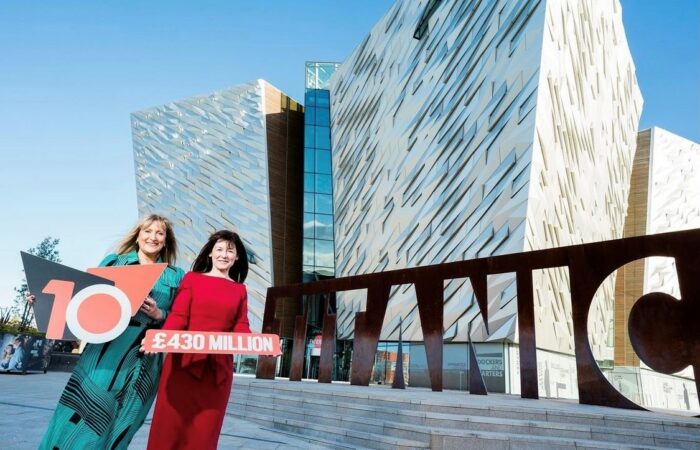 A new report has revealed that Titanic Belfast has generated an estimated £430 million in direct spend for the Northern Ireland economy since it opened its doors 10 years ago today.

The report, carried out by Deloitte Northern Ireland, also revealed that in its eight to tenth years of operation, the combined economic impact of Titanic Belfast has been £79 million, highlighting the vital role the iconic building continues to play a decade on.

And to mark its milestone birthday, the world-leading visitor attraction, which to date has welcomed almost 6.5 million visitors from over 145 countries, has embarked on its most ambitious project, and largest single investment to date, a multi-million pound gallery refreshment programme. The investment will come from the Titanic Belfast Gallery Refreshment Fund, established when the building opened as part of the commercial operator agreement and held by the charity owner, Maritime Belfast Trust.

Judith Owens MBE, Chief Executive of Titanic Belfast said: “As part of the 10th birthday celebrations, we are delighted to announce a multi-million pound gallery refreshment programme which will deliver a world-class spectacle by combining innovative technology with the authentic Titanic story to deliver an enriched, emotive and immersive visitor experience which will sustain Titanic Belfast as a must see global attraction for years to come.

“Since opening on Saturday 31st March 2012, Titanic Belfast has gone from strength to strength and played a key role in the resurgence of tourism, not only for Belfast and Northern Ireland, but for the island of Ireland as a whole. In the last 10 years, we have firmly established ourselves on the local, national and international stage, winning a host of prestigious accolades including being named as the World’s Leading Tourist Attraction.

“82% of visitors come from outside of Northern Ireland demonstrating the important driver this iconic building plays for inbound tourism. Titanic Belfast has not only driven leisure tourism but has been fundamental in reinvigorating Belfast’s event industry as one of the city’s signature venues having hosted over 3,000 business and leisure events. We are firmly committed to preserving the authenticity of Belfast’s maritime and industrial heritage and in playing a pivotal role in the regrowth of local tourism post-pandemic, particularly as international travel resumes.”

Kerrie Sweeney, Chief Executive Officer of Maritime Belfast Trust, charity owner of Titanic Belfast, said: “On behalf of Maritime Belfast Trust we would like to congratulate Titanic Belfast on reaching this 10 year milestone as well generating the local economic impact of £430m. Located at the heart of Belfast’s Maritime Mile it plays a key part in making our iconic waterfront a vibrant, accessible heritage destination.

We look forward to working with Titanic Belfast, Opera Amsterdam and Studio Louter on the delivery of the project which will enable Titanic Belfast to continue to push boundaries and maintain international standout, whilst preserving our rich maritime heritage for current and future generations to enjoy.”